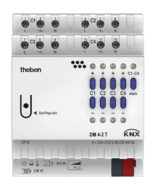 The dimming actuator has one manual button each for 4 channels.
When manual mode is activated the dimmer can only be operated with the buttons.
Bus telegrams will not be executed.

2 buttons and 2 LEDs are available for each channel.
The upper LEDs show the current state (LED on = dimming value > 0 %):

The device dims down to 0 % in the event of excess temperature or a short circuit in the load, and the lower LED flashes.
In case of a short circuit, the lower and the upper LED of the channel will flash. If a button is blocked, the corresponding LED will flash.

In standard operation:
Pressing a button establishes the desired dimming value.
A status established via the channel button can be overwritten via the bus at any time.

In manual operation with the manual button or Manual object:

If the “manual” function is selected, the associated LED lights up.
Any time functions that are running (e.g. soft switching) will be terminated.
The dimming status will be frozen and can only be changed via the channel buttons.
Bus telegrams will not be executed anymore.

The “Manual” state will be reset in the event of a mains failure.
After manual operation has been cancelled, already received bus events will not be executed again.